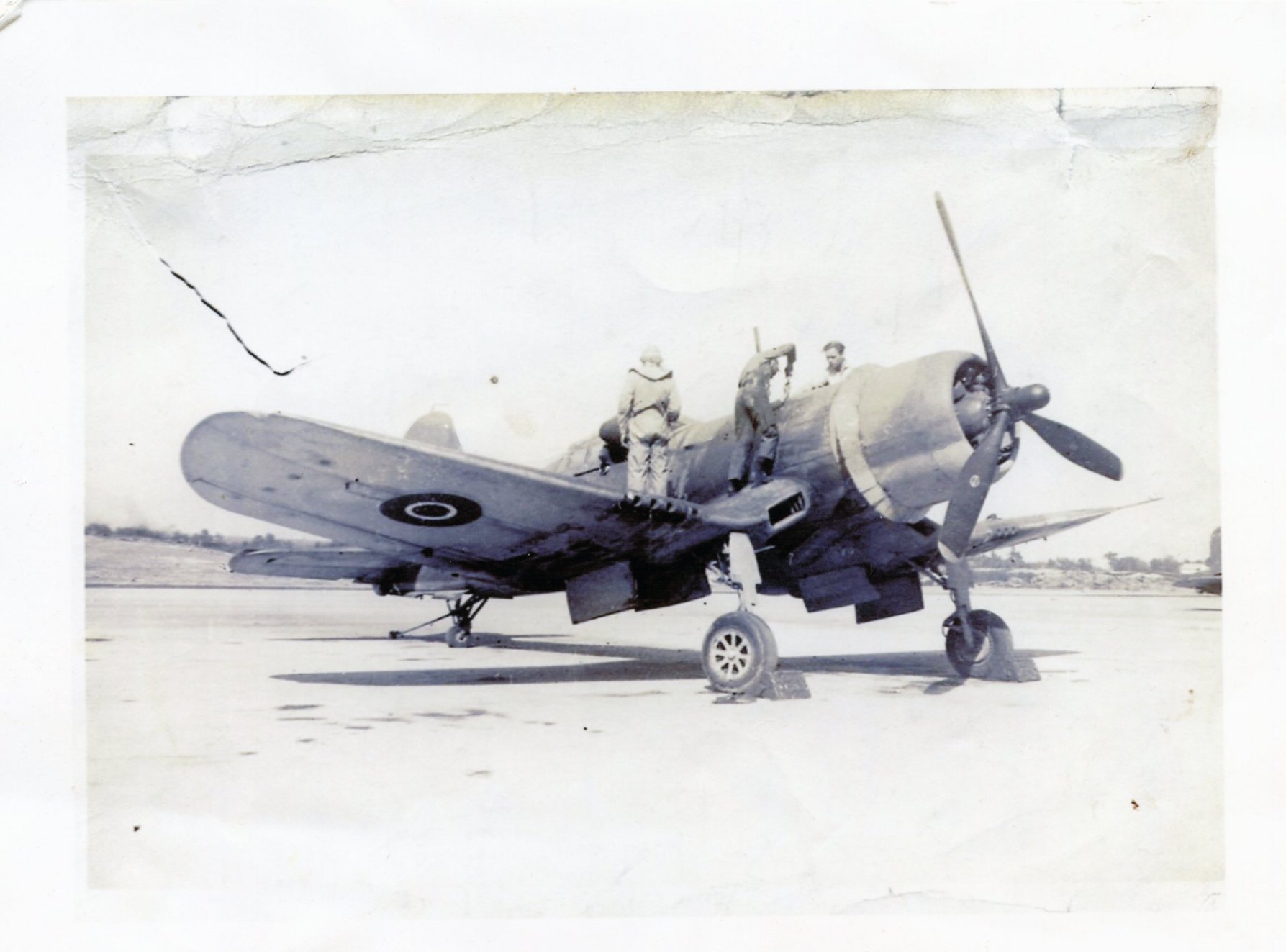 Herewith a brief summary of my WWII experiences as a fighter pilot from memory. My flying log book was lost when it was sent to the Admiralty for assessment as to my suitability for a permanent career in the peacetime Navy. Although I joined the Navy in 1940 it was 1942 before I was transferred for flying training. Minesweeping was a top priority role in the Battle of the Atlantic.
Having got my “wings” in 1943 after advanced training on Havards in Pensicola and Corsairs in Rhode Island, I was appointed to a Corsair squadron. 1835 Squadron were forming up with Corsairs as the US Navy were no longer assigning their pilots to Corsairs – too many losses of planes and pilots. They had not adopted the RN curved approach which Winkle Brown had perfected in trials. Even so there were still a lot of casualties.

The squadron was embarked on the carrier Victorious, escorting convoys in the North Atlantic based at Machrihanish in the Clyde. Cargo and merchant ships leaving the USA ports individually amassed 2/300 miles off the west coast of Scotland, escorted by the Royal Navy to various ports on the west coast – the Clyde and Liverpool being the biggest. U boats were waiting for them.
I, together with a couple of other pilots, was posted to land bases to fly a variety of other planes – Swordfish, Fulmers and other types with a greater range and economical fuel consumption. The object being to fly low (500 ft) looking for U boat periscopes above the water, spotting convoys and unescorted shipping.

In 1944 with the German U boat code broken by Bletchley Park, the Battle of the Atlantic was over. I remained at RN Air Station Ayr (HMS Ringtail) in charge of the RN fleet requirement squadron 772. This supplied pilots and different types of planes – Spitfires, Seafires, Hurricanes, Wildcats, where wanted.

I was also sent on a twin engine course (Blenheims, Beauforts) as the RN were intending to form squadrons of Hornets – a twin engine version of the Mosquito which Winkle Brown had landed on a carrier.
With the successful invasion of Europe over, the concentration was on Japan. The Hornet never materialised – the Atom bomb was dropped.

I declined the offer of a permanent career in the RN – 6.5 years of war was enough for me and came out in June 1946.

Laurence recently visited the heritage hangar to celebrate his 101st birthday with us. You can read more and see some great photos of his visit by following the link below.