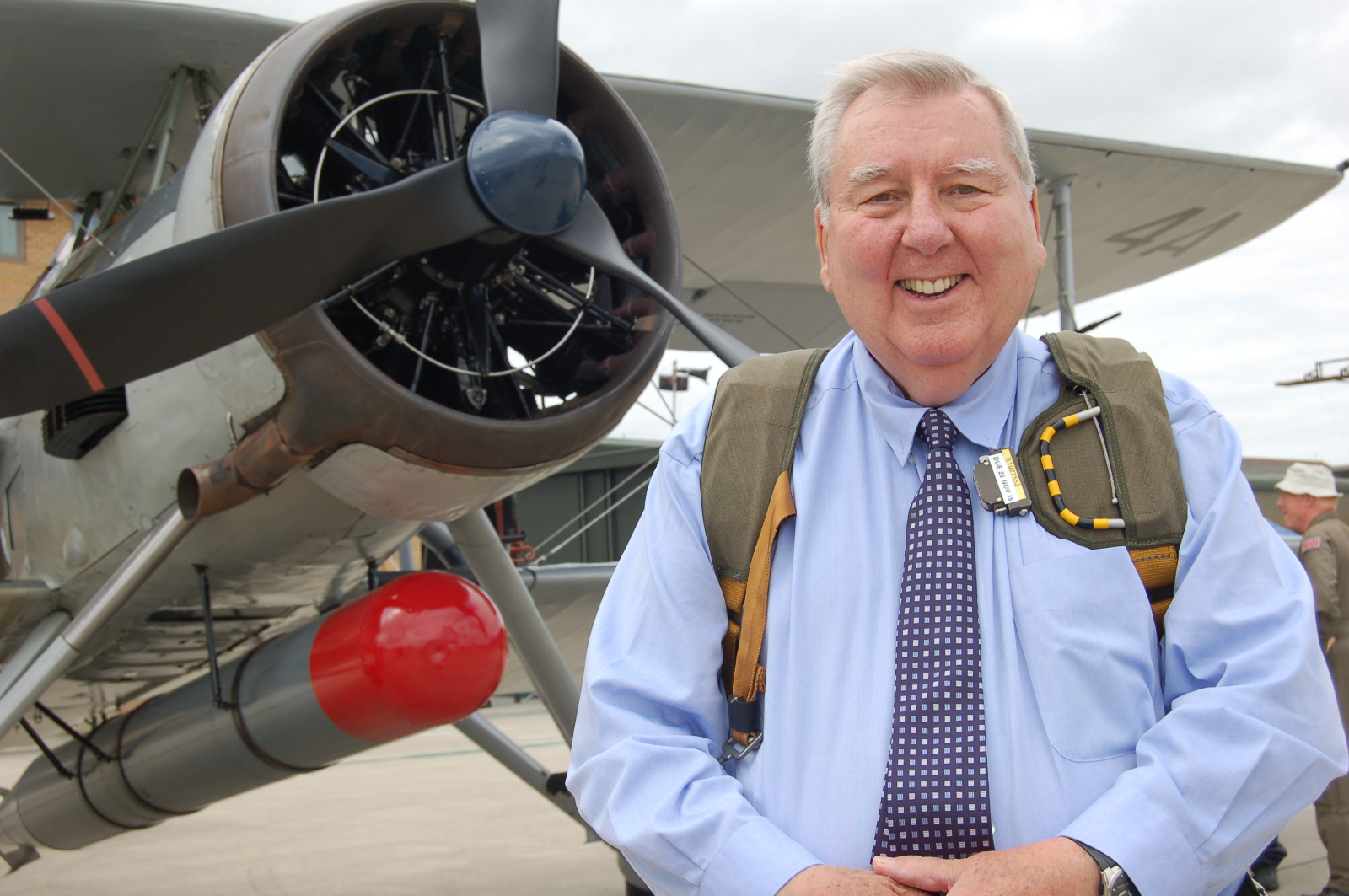 It is with great sadness we announce that Navy Wings Ambassador, Sir Peter Harrison KGCN CBE, passed away on 18 June 2021.

Sir Peter, who gave his time and support to the charity over many years, made a major donation of £200,000 from the Peter Harrison Heritage Foundation in 2013, to complete the large scale restoration project of returning Swordfish Mk 1 W5856 to the air.

The aircraft, which was built in 1941 by Blackburn Aircraft, is the oldest surviving Swordfish Mk 1 in the world. However, in 2003 she was grounded with corrosion in her wing spars. She also needed a complete overhaul of her Pegasus engine. Many components had run out of life and others including new pistons and cylinders had to be specially manufactured. “It was a meticulous and painstaking job, and it was Sir Peter’s generosity at a time when it was feared the aircraft would remain grounded indefinitely, that made a real difference” said Rear Admiral Tom Cunningham, Chairman of Navy Wings. “Sir Peter’s visionary gift enabled the project to finally come to completion and this absolute gem of an aircraft, the last surviving Mk1 Swordfish in the world, to take to the skies again” continued Tom.

“The story of the Swordfish attack on the Italian Fleet at Taranto gripped me as a schoolboy” said Sir Peter “and I was immensely proud to have been able to save an aircraft of such national and historical importance.”

Sir Peter visited Navy Wings regularly during the restoration to see progress for himself and took great pleasure in being the first passenger to fly in the aircraft when she flew again in June 2015. 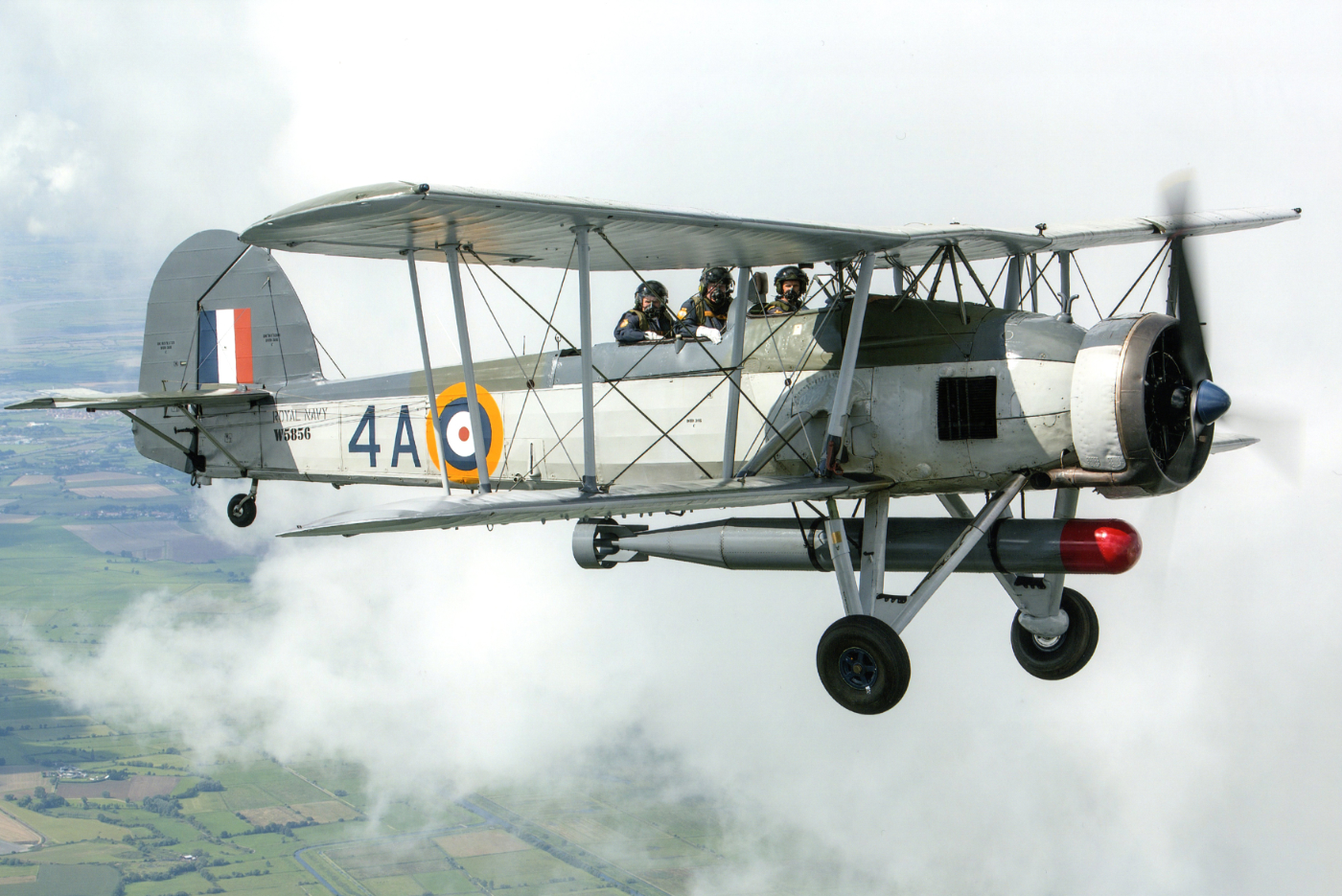 Sir Peter was captivated by the story of the Swordfish as a schoolboy and flying in the Swordfish was the fulfilment of a lifetime’s dream. 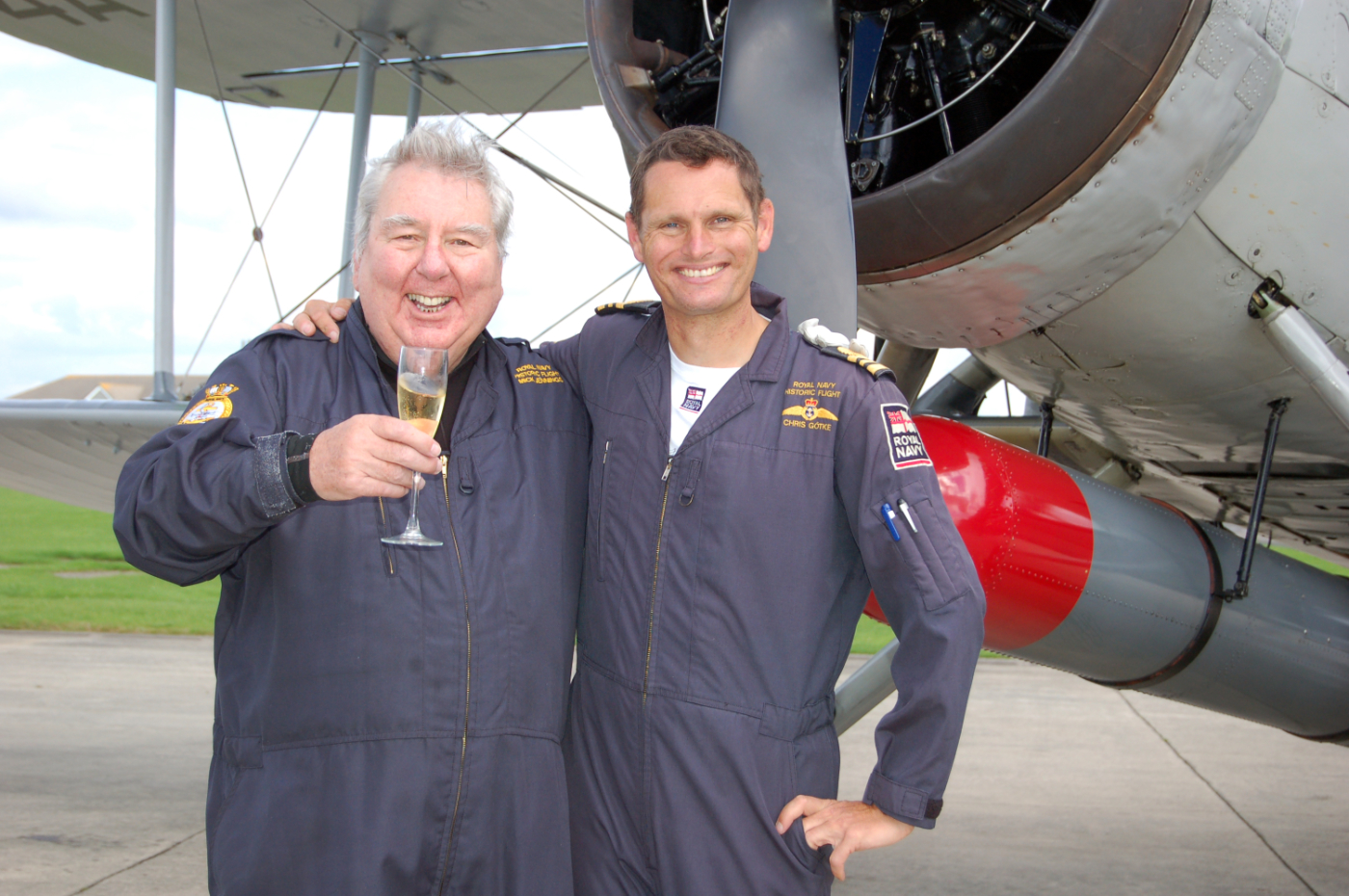 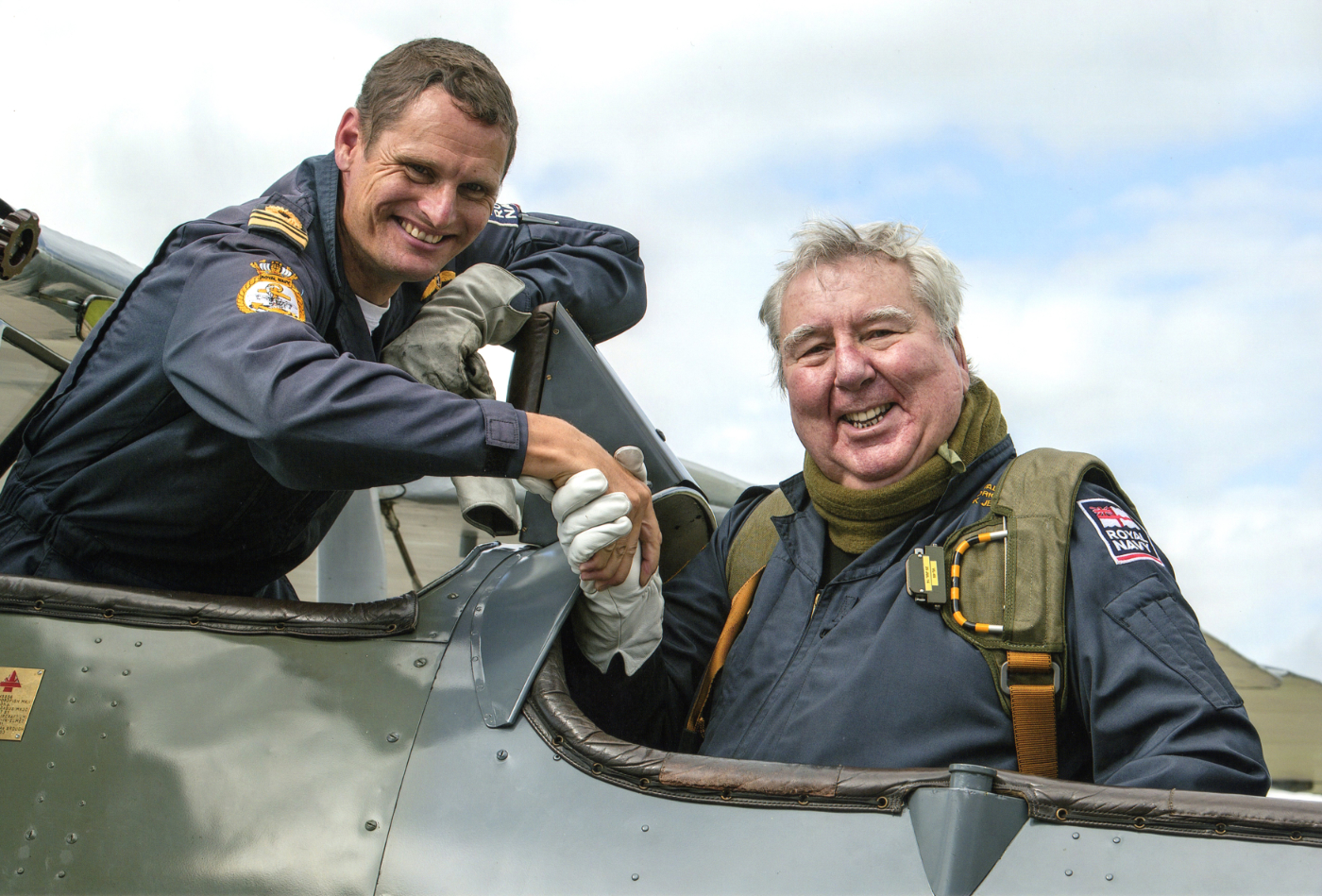 Sir Peter flying in Swordfish W5856. “My flight in the Swordfish was a great sense of encountering history” said Sir Peter. “The contribution of the Swordfish is often forgotten but a squadron of Swordfish could change the course of a naval battle!”

“It was important to me that the project would deliver wide public benefit,” said Peter. “I was delighted to see the aircraft returned to her former glory in her wartime markings. I hope she will continue to fly at commemorative events around the country for many years to come, so future generations can be inspired, as I was at an early age.”

Of Sir Peter’s contribution, Chief Executive of Navy Wings Jock Alexander said, “Navy Wings is saddened to hear of the passing of Sir Peter. He was a genuine and warm-hearted friend to the Charity and will be sorely missed. Swordfish W5856 is his legacy to the Nation.”

The successful entrepreneur turned philanthropist who sold his tech company Chernikeeff in 1999, for £300 million, invested the money in a family charitable foundation, the Peter Harrison Foundation in 2000.

Since its inception, the Foundation has awarded grants of over £50 million to many charities and organisations in the fields of sport, education, and special needs. Sir Peter’s wider personal and philanthropic interests also included a passion for naval and military history which led to the founding of the Peter Harrison Heritage Foundation in 2012.

His charitable gifts to the heritage sector included the redevelopment of the Imperial War Museum with the opening of the First World War Gallery in 2014 and the Peter Harrison Planetarium at the National Maritime Museum Greenwich.

Peter will be much missed by many of the organisations and charities he supported and particularly the yachting community in Antigua. An avid sailor, he took part in 14 transatlantic races and sailed in Antigua for 30 years, entering the history books by winning the Lord Nelson Trophy in the Antigua Sailing week three times in his 115-foot superyacht, Sojana. The Peter Harrison Foundation also donated significantly to the building of the marine industry in Antigua and Barbuda and founded the Caribbean Nation’s National Sailing Academy enabling disabled adults and children to learn to sail.

Sir Peter was made a CBE in 2010 and was knighted (Knight Grand Cross of the Order of the Nation) for his services to charity by Her Excellency Dame Louise Lake-Tack, former Governor General of Antigua and Barbuda in 2013. 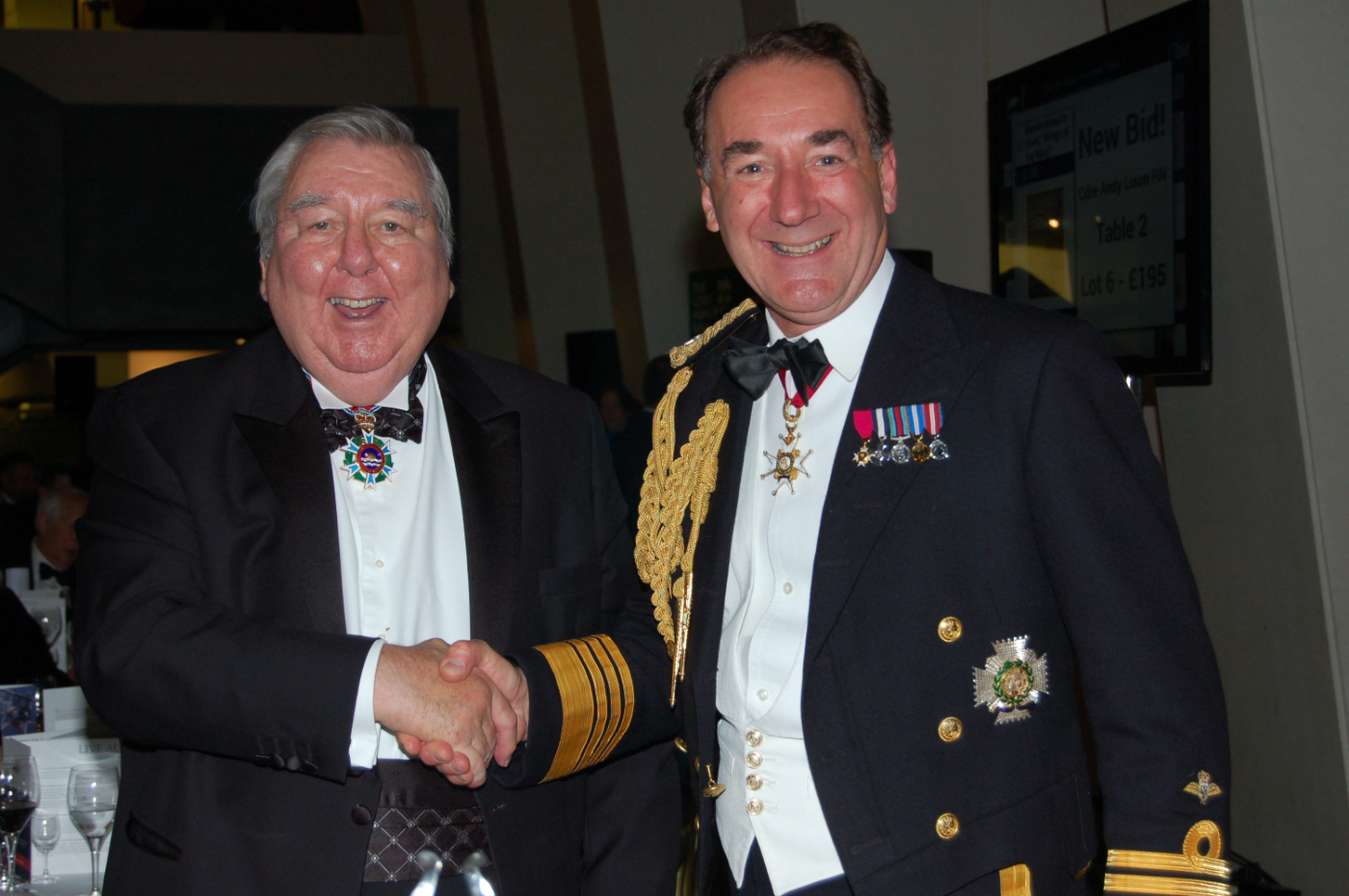