There are a number of ways in which you can support Navy Wings and help to keep the nation’s historic naval aircraft flying.

Why should you support Navy Wings? We believe it is really important to preserve these old aircraft in a flying state so that future generations can understand just what it took for young men to fly in really arduous conditions and in many cases under fire, from ships at sea. Whether it is the flimsy canvas on the Swordfish fuselage (of Bismarck and Taranto fame), the absolute basic design of the Bristol Scout which flew from ships in the Great War, or the sheer size of the Sea Vixen which was central to jet operations from aircraft carriers, it is difficult not to be moved when you get up close and personal.

It is only when you see them fly that you understand just what they mean to the history of the nation and in particular, the history of maritime aviation in the Royal Navy. So, to answer the question of why should you support us, if we cannot raise the money on an annual basis to keep them operating, all of these aircraft will end up in museums and will never fly again. Our Supporters are the engine room which keep us going as a charity and for the price of less than a pint of beer or glass of wine a month you can make a real difference.

Become a supporter and from as little as £3.00 a month, not only will you be keeping our historic aircraft flying, you will also have access to a range of fantastic benefits.

The Navy Wings community relies greatly on volunteers who help at air shows and events, provide technical expertise and go that extra mile to help raise the funds we need to keep our aircraft flying.

By remembering Navy Wings in your will, you can help us to keep these beautiful aircraft flying and in doing so you will be directly helping to keep our shared heritage alive.

Your donations continue to help keep our heritage aircraft flying as a living tribute to the bravery and ingenuity of those who flew and maintained them.

Supporter packages enable everyone to get involved and work with us to preserve and fly our historic aircraft. Which package is right for you? 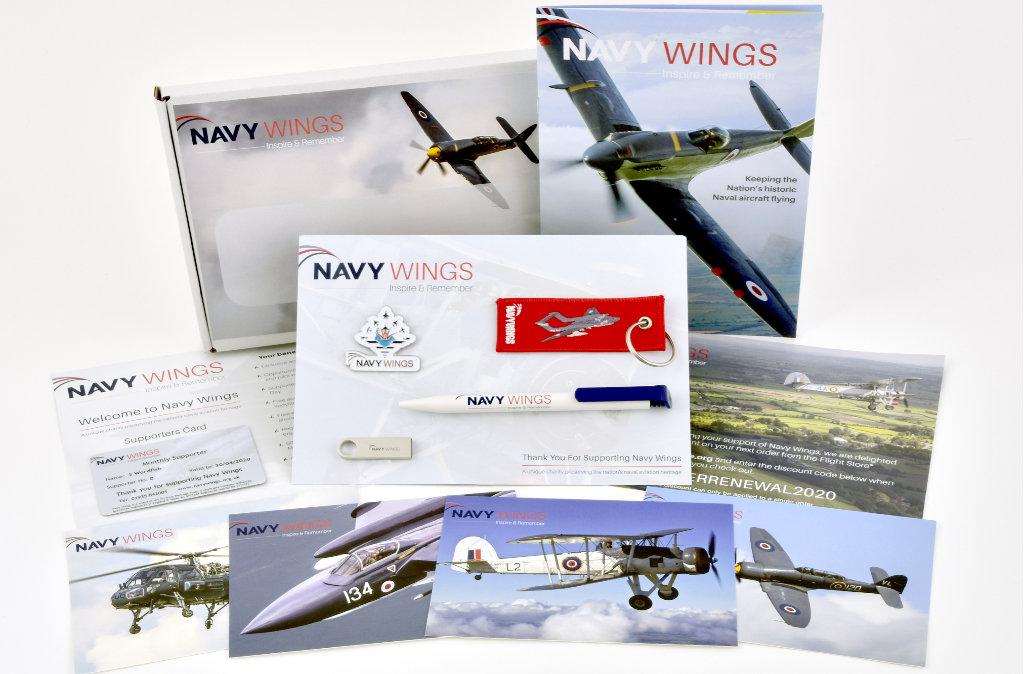 When you become a Navy Wings Supporter, not only will you be helping to keep our aircraft flying, you’ll also have access to a fantastic range of benefits. These include:

The Navy Wings Heritage Centre is home to our fantastic collection of aircraft including our Sea Vixen, Sea Fury T20 and Swordfish LS326 and W5856 amongst others. You will have exclusive access on our regular Supporters’ events and experiences.

Working closely with RNAS Yeovilton, we are able to give our supporters big discounts on tickets to the Royal International Air Day. In 2018, we offered our supporters discounts of £10 per ticket. If you were a family of four, your discount would be more than you pay to be a Navy Wings supporter!

Escape the crowds with free access to our private marquee at Yeovilton Air Day each year (which provides free refreshments, comfort facilities and the option of a catered lunch). You will also get the chance to meet and talk to the pilots, engineers and charity staff from Navy Wings.

When you are a supporter you will be automatically entered into a draw to win a special flight in one of our aircraft!

You will receive regular newsletters which cover the latest news of the Trust’s work and the operational status of the Navy Wings aircraft.

50% off standard day admission to the Fleet Air Arm Museum

If you plan to visit with 3 friends, you will save £27 on the cost of admission. That is nearly the equivalent of your annual supporter cost.

On presentation of your Navy Wings Supporter card, you will be able to purchase an adult ticket for only £8!

When you visit the Brooklands Museum you will receive £2 discount off tickets on presentation of your Navy Wings Supporter card.

Why Become a Supporter?

Becoming a Navy Wings supporter gives you access to real money saving benefits. For example, you can save up to 50% off museum tickets, get great discounts on merchandise and receive big discounts on The Royal Navy International Air Day tickets all while supporting the work of the charity.

Your Support is Vital

Without the annual commitment of our Supporters, these remarkable aircraft, which bring together the story of flying historic naval aircraft, people and flying from warships at sea, will all be lost to future generations.  Be part of the story and sign up as a Supporter from just £3.00 a month!

Our newest aircraft is more than 50 years old! The ongoing challenges of servicing and finding spares for these historically significant aircraft need all the help you can give. So thank you for your donation, however large or small.

Other Ways to Make a Donation to Navy Wings

There are many ways in which you can support Navy Wings.

If you would like to donate directly from your online bank account then simply set up a payment to:

Please include in the reference the word: Donation and please email us to tell us you have donated so that we may thank you.

To make a text donation to our aircraft simply text

You are very welcome to send us a cheque. You can find our address here. Please don’t forget to include your address so we can thank you. If you print out, sign, and also return the Gift Aid Declaration we can automatically increase your donation by 25% by claiming back tax on your behalf (if you are a UK taxpayer).

Some employers (including the UK Armed Forces) offer Payroll Giving. You can donate to a charity directly from your salary and for every £1 you nominate to donate to us, only 80 pence is taken from your pay. Simply notify your payroll office of our details.

You can support the Charity by buying and selling online or holding a high profile auction by choosing Fly Navy Heritage Trust as your chosen charity.

Donate by Shopping  on Amazon

Did you know you could support the Navy Wings Charity every time you shop on Amazon? Shop and raise money to help keep the heritage aircraft flying!

1. Sign in here on your desktop or mobile phone browser.
2. From your desktop, go to Your Account from the navigation at the top of any page, and then select the option to Change your Charity.
3. Select Fly Navy Heritage Trust Limited

Amazon donates 0.5% of the net purchase price of eligible purchases. It’s as simple as that!

Donate by Booking a Holiday on Give As You Live

Whether it’s a late summer break, a winter getaway, or planning for a 2021 escape, you can make a difference to Fly Navy Heritage Trust Limited when you book with trusted brands via Give as you Live Online.

With destinations around the world reopening, and accommodation providers offering free cancellations and extra precautions, now’s a great time to start planning your next holiday and get back to exploring the globe.

Leaving a gift to Navy Wings in your will is an easy way for your generosity to last beyond your lifetime and benefit future generations. 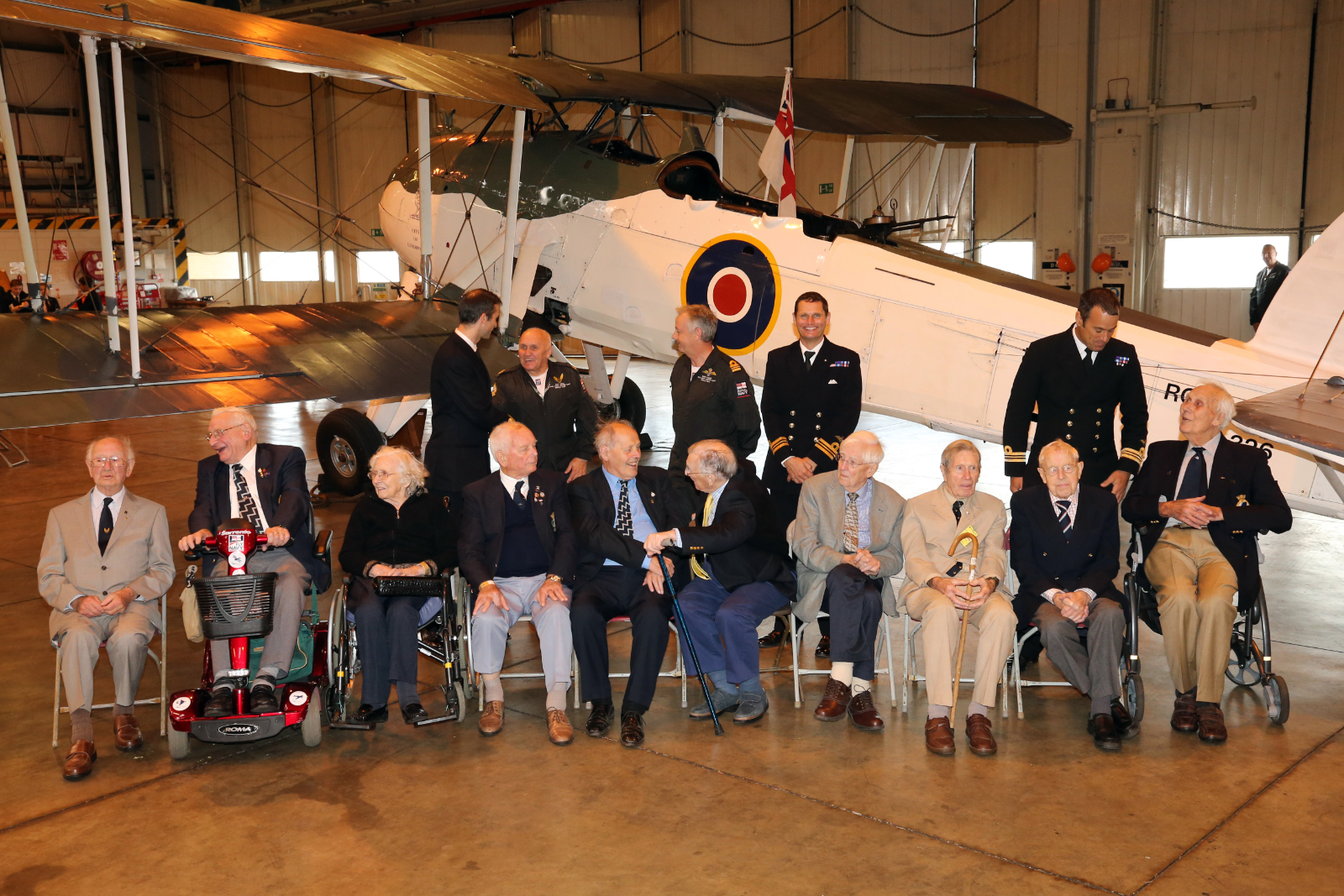 Few people today are aware of the perils of flying from ships at sea or the important part played by the Royal Naval Air Service and Fleet Air Arm in our nation’s history. When they see the rare and remarkable aircraft of the Navy Wings collection flying, they are overwhelmed by the stories of the young men who flew them and the heroic and daring missions they undertook.By remembering the Charity in your will, you can help ensure that these magnificent aircraft are not lost forever to future generations, and that the pioneering spirit, courage and sacrifice of all those who have served in the Royal Navy’s Fleet Air Arm, to whom the nation owes such a debt of gratitude, will never be forgotten.

We appreciate that the decision to leave a legacy to any charity is a decision that isn’t made lightly. Our aircraft are veterans in their own right, with distinguished battle honours. They were not built to still be flying half a century later and we need your help and support to preserve them as a living memorial to all who have lost their lives in the service of naval aviation.

The hazards of flying from ships at sea are much greater, than flying over land resulting historically in many naval air casualties from accidents as well as combat. Landing on a pitching and rolling flight deck, fog, storms, high sea states, mechanical failure, navigational difficulties and limited endurance were factors that often played a part in naval aviation losses and sadly many naval aviators were lost at sea with no known grave.

Your legacy will help keep the Swordfish flying at annual remembrance ceremonies and at air shows around the country.

You might also consider making a donation in memory of a loved one or friend or ask for donations made at your funeral to be gifted to the Charity. Legacy giving often brings a great sense of pride and lasting peace. Thank you for supporting us in this way. If you have any questions or would like to visit us, see the aircraft or talk to the Chief Executive or a member of the team, please do call us on 01935 842005 or email office@navywings.org.uk

Become a Volunteer at Navy Wings 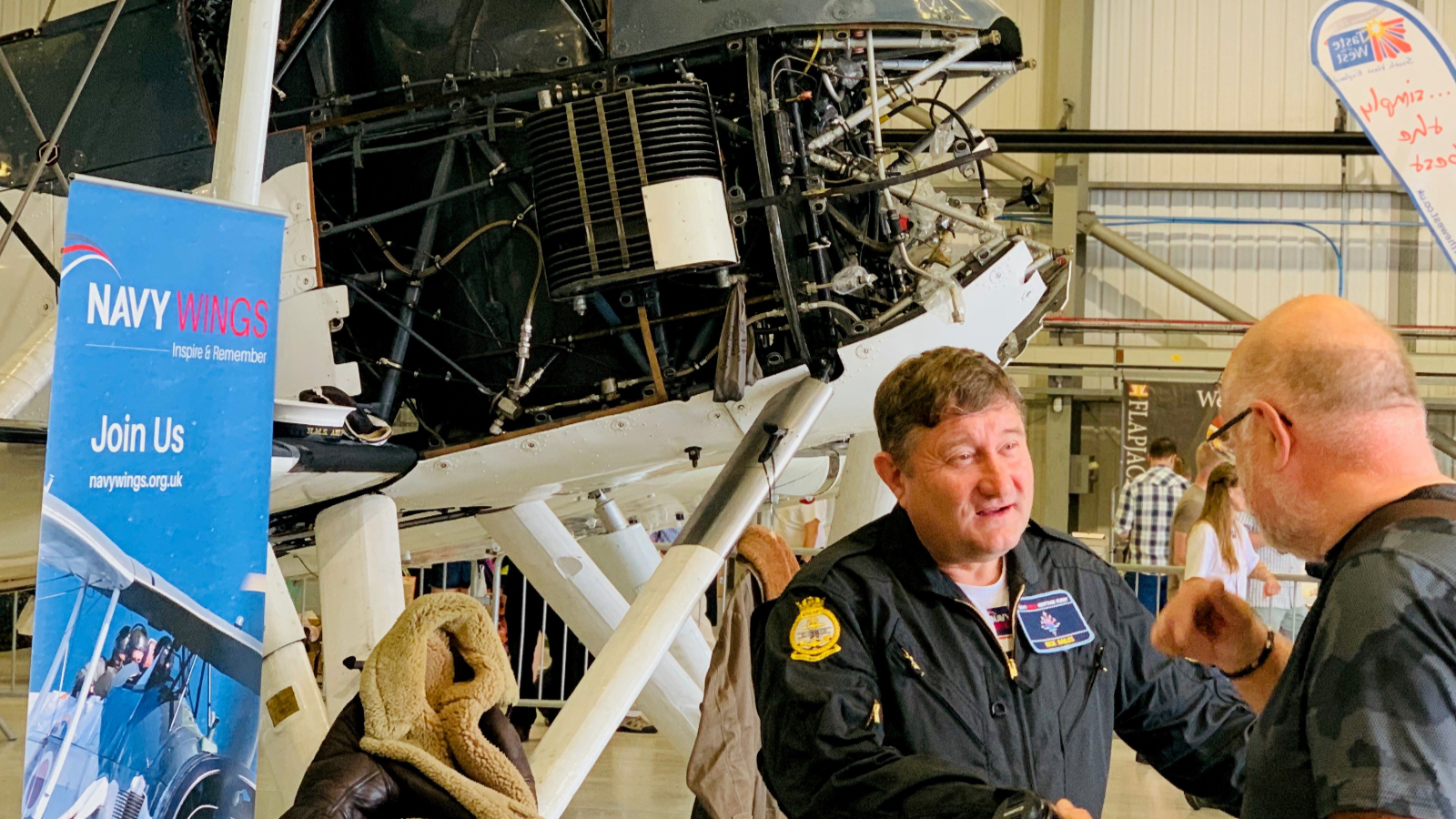 The Navy Wings community relies greatly on our fantastic team of volunteers who help at air shows and events, provide technical expertise and go that extra mile to help raise the funds we need to keep our aircraft flying.

Event Support – We attend air shows up and down the country during the display season and are  always grateful for volunteer help at events such as Yeovilton Air Day, Bournemouth Air Festival and Duxford (to name just a few!). The role involves promoting Navy Wings, helping to sell goods and generally assisting with the logistics are all of huge help to us.

In Service volunteer – If you are currently serving in the Royal Navy and would like to be an ambassador for us, promoting our heritage aircraft and the legacy of the men who flew them, then do get in touch.

Work with the office team – There are often jobs within the office and we would be delighted to hear from you if you work near Yeovilton and would like to offer a few hours of your time.

Intern – we have a one-year intern position available for a student carrying out a placement year, or wanting a few months’ experience post-graduation. You will work closely with our whole team to learn about the operation of a small business/charity as you work on projects.

Please email office@navywings.org.uk if you would like to attend.

Please complete and return our Volunteer Questionnaire Form, telling us about your experience and skills and what sorts of activities may interest you. Please bear in mind that we are based at Yeovilton in Somerset.